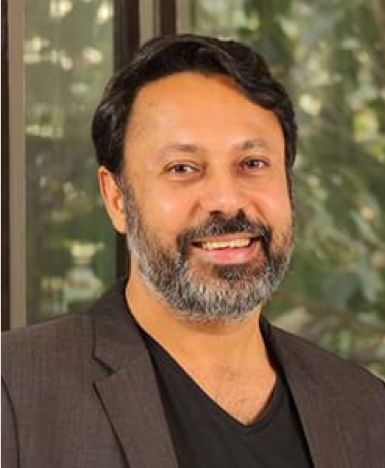 Inderpreet Wadhwa is one of the most prominent thought leaders in the Indian solar industry. A renewable energy enthusiast with more than 20 years of experience in technology and infrastructure businesses, Inderpreet founded Azure Power in 2008. Through his work, he strives to have a direct and positive social impact in terms of improving the quality of life in rural India.

Inderpreet has been a member of the Private Sector Advisory Group (PSAG) to the Green Climate Fund (GCF). Inderpreet received his bachelor’s degree in electronics engineering in 1994 from Guru Nanak Dev University, Punjab, India. He also graduated from Haas School of Business at University of California Berkeley in 2002.

Shri Gupta is a serial entrepreneur and an award-winning scientist who is passionate on the urgency to reduce the effects of Climate Change. Shri Gupta’s Electrovaya is competing with much bigger companies such as Panasonic and Samsung for a stake in the burgeoning global battery market. With 150 patents and an advanced lithium-ion technology that packs more energy into a smaller space, the company is carving out a reputation for innovation. The company is already supplying batteries to Chrysler auto. Shri Gupta says the biggest market may be for large utility-scale storage batteries that will help make solar or wind power more viable.

Shri Gupta has been a member on the White House Committee on Energy & Environment. Born in Kolkata, Shri Gupta is a graduate of Presidency College, Kolkata and received his doctorate from Imperial College, London. He serves as an Adjunct Professor in the Faculty of Engineering at the University of Toronto.

As a co-founder of Enphase Energy, Raghu Belur helped commercialize the world’s first microinverter system, a technology that operates in about 700,000 systems around the world and accounts for over 3 gigawatts of energy generating capacity.

As vice president of products and strategic initiatives, Raghu has brought to market the world’s first truly integrated energy system—with solar generation, storage, monitoring, and control. He is also leading the development of a grid-tied microinverter system that can operate independently from the grid.

Raghu co-founded Enphase with Martin Fornage in 2006. Beforehand, he developed high-speed optical communication technology for Cerent, which was later acquired by Cisco Systems. Raghu holds a master’s degree in electrical engineering from Texas A&M University and an M.B.A. from the University of California, Berkeley’s Haas School of Business.

Prof Dharendra Yogi Goswami (born May 15, 1948) Prof Goswami is a distinguished Professor and the Director of the Clean Energy Research Center at the University of South Florida. He is also the editor-in-chief of the journal Solar Energy, and has published more than 400 peer-reviewed articles and a number of books and book chapters. Goswami conducts fundamental and applied research into solar thermal energy, thermodynamics, heat transfer, HVAC, photovoltaics, and hydrogen & fuel cells. He is the inventor of a novel thermodynamic cycle for solar thermal power, now known as the Goswami cycle. He holds 18 patents and many of his inventions have been commercialized. In 2016, Prof Goswami was inducted into Florida Inventors Hall of Fame. Recently he co-founded Molekule Inc, which markets an air purifier. Born in India (May 15, 1948), Yogi Goswami received his degree in mechanical engineering from Delhi College of Engineering, and received his M.S. and PhD in mechanical engineering from Auburn University. He also worked at the North Carolina A&T State University and the University of Florida.

Shri Bhave is an ex-visiting professor of strategy at Indian Institute of Management, Kozhikode, Kerala. Earlier, Mahesh held senior positions in new business development, corporate strategy, and product management at Citizens Utilities, Sprint, Hughes Network Systems, and start-up organizations. Bhave is a chemical engineer from IIT, New Delhi, and has a MPA and Phd in interdisciplinary social sciences from Syracuse University, New York. Mahesh set up BHAVE Power Systems, a clean-tech start-up, that pioneers the use of solar photovoltaics plus Li-ion batteries for cooking. By effectively leveraging solar, Bhave expects to reduce bio-mass burning and greenhouse emissions and improve the health of women in rural areas and to progressively eliminate the use of LPG and other conventional energy for cooking. BHAVE Power Systems was a finalist in the ONGC’s Solar Chulha Challenge. He has also authored a number of books including, “The Microgrid Revolution”. To Bhave, microgrids are intrinsically future-friendly solutions that can extend energy access to millions and will help with grid stability as the proportion of renewables increases in the energy mix.

Kuleep is the Founder and Managing Director of CleanMax Solar. Started in 2011, CleanMax Solar has successfully delivered more than 250 rooftop solar projects, and also supplies solar power to customers from a network of solar farms across Tamil Nadu and Karnataka. CleanMax Solar has been ranked as #1 Rooftop Solar Developer in India for 3 consecutive years, with market share averaging at 25%. CleanMax serves leading Indian and global corporates including groups such as Tatas, Mahindras, Godrej, Bajaj, TVS, Birlas and top global MNCs. CleanMax has also recently begun international expansions, including in Middle East and SE Asia. Kuleep was previously a global partner at McKinsey & Company and headed energy and corporate finance practices in India. He has an MBA from IIM-Ahmedabad and also holds Chartered Accountant and Cost Accountant degrees from ICAI and ICWAI respectively. In addition, Kuldeep serves on the board of leading companies such as Nazara Gaming (Emerging Markets largest mobile gaming services provider) where he is a board representative of West Bridge Capital. Kuldeep also serves on the advisory board of a social impact fund launched by Contrarian Capital.

OMC Power provides solar powered lanterns to rural homes without access to a reliable supply of electricity from the grid. The charged lanterns are delivered to homes in the evening, and collected early in the morning to be recharged. OMC also supplies charged battery units, called “bijli boxes”, for basic household requirements. OMC aims to operate 1,000 mini-grids with total generation capacity of about 50 MW over the medium-term, supplying electricity to more than 1 million rural un-electrified. OMC has 70 Power Plants in commercial operation with 3 MW installed generation capacity in Uttar Pradesh.

Anil was the start-up CEO of Hutchison in India and launched the country’s very first mobile network. He started his career at Ericsson where he held a number of senior management positions in Sweden and in Asia Pacific. He also headed Ericsson’s companies in India and Indonesia establishing the company as the market leader.

Prof Upadhyaya has a BSc (Hons) and MSc in Physics (Electronics major) and a PhD from BHU, Varanasi (India). His research experience spans over 25 years in Renewable Energy involving activities on Transparent Conducting Oxides (TCOs), Dye-sensitized Solar Cell (DSC), Perovskite solar cells, CdTe and CIGS thin film solar cell technologies. Prof. Upadhyaya was instrumental in establishing the world class PV laboratory at CREST, Loughborough University (2005-2011), where he led the Thin Film and Excitonic Solar Cell group. Prior to this he served at Brunel University and at Heriot-Watt University. He had also carried out DST (India) sponsored projects on Na- rechargeable batteries and super-capacitors using conducting polymers. Prof. Upadhyaya is joining hands with E4U, (the French holding company) and SVS Ltd (UK) in setting up a New company, NanoGigaSolar “NGS” (an R&D and Consultancy entity) in the UK with a focus on the development of flexible CIGS on steel foil for BIPV application along with other elements connected with Renewable Energy generation, storage, energy transport, and distribution.

Prof Agrawal is the Winthrop E. Stone Distinguished Professor in the Davidson School of Chemical Engineering at Purdue University. He received a B. Tech. from IIT Kanpur, an M.Ch.E. from the University of Delaware and an Sc.D. in chemical engineering from MIT. His research includes novel processes for the fabrication of low-cost thin-film solar cells, energy systems analysis, biomass to liquid fuel conversion, synthesis of efficient multi-component separation processes using distillation, membranes and adsorption, and basic and applied research in gas separations and liquefaction. Agrawal has published 187 technical papers and has given over 240 invited lectures. He holds 125 U.S. and more than 500 foreign patents. These patents are used in over one hundred chemical plants with total capital expenditure in multibillion dollars. He has served on technology and engineering advisory boards of a number of MNCs. Agrawal has received 59 national and international awards and honors. Prof Agrawal received the highest honor from the US government, the National Medal of Technology and Innovation from President Obama in 2011. Innovation from President Obama in 2011.

Harish is an Indian social entrepreneur, who co-founded SELCO India in 1995. SELCO is a social enterprise set up to eradicate poverty by promoting sustainable energy services to the poor in rural India.

He was awarded with the Ramon Magsaysay Award for 2011 for "his pragmatic efforts to put solar power technology in the hands of the poor, through his social enterprise SELCO India". SELCO aims to empower its customer by providing a complete package of product, service and consumer financing through grameena banks, cooperative societies, commercial banks and micro-finance institutions.

Shri Ashish Khanna is the ED & CEO of Tata Power Solar Systems – India’s largest integrated solar company, previously known as Tata BP Solar. TATA Power Solar Systems today has a module manufacturing capacity of 400 MW and a cell manufacturing capacity of 300 MW. The company is a lead player in the rooftop solar segment and achieved the milestone of shipping 1 GW modules worldwide in 2017.

Ashish joined the Tata Group in 2007, holding a series of leadership positions in Tata Power. He brings with him over 27 years of experience, having worked with multinational companies in the past. Having been on the executive board of Tata Power Solar since 2013, he has significantly contributed to setting up and governing the organizations’ objectives and policies. He is also on the board of other Tata Power group companies. Ashish is a mechanical engineer and holds a Masters Degree in Management & Systems from IIT (Delhi).